You can buy parts: . 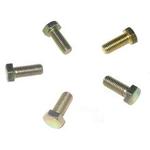 For full view, you need register

Loading of the Generator
When a generator is installed or reconnected, be sure that the total current in one phase does not exceed the nameplate rating. Each phase should carry the same load. This allows the engine to work at the rated capacity. An electrical unbalance can result in an electrical overload and overheating if one phase current exceeds the nameplate amperage.Allowable combinations of unbalanced loads are shown in Illustration 1. When you operate with significant single-phase loads, the combinations of single-phase load and three-phase load may be used. Such combinations should be located below the line on the graph.
Illustration 1 g00627416
Allowable Combinations of Unbalanced Loads
Block Loading
When an electrical load is applied to a generator set, block loading occurs. This load may be anywhere from a moderate percentage of the rated load up to the rated load.The block loading capability of a generator set depends on the following factors:
Engine transient response
Voltage regulator response
Type of the voltage regulator
Altitude of operation of the generator set
Type of load
The amount of load that is already present If a block load derating is required, refer to ISO 8528 Standards or SAE J1349 Standards. Also, reference Engine Data Sheet, LEKX4066, "Loading Transient Response" and Engine Data Sheet, LEKX4067, "Block and Transient Response". Power Factor
Power factor (PF) determines the relationship between true power and apparent power. The true power is also known as the active power. The apparent power is also called kVA. The true power (kW) is the work that is done on the load by the engine. The true power determines the amount of power that is available for the load to do work. The apparent power (kVA) is the total power that is produced by the generator. Power factor can be calculated by using the following formula.PF = kW / kVA,kW - kilowattskVA - kilovolt amperekVAR - kilovolt ampere reactive is the unit of measurement for reactive power.Note: The generator does NOT control power factor. Power factor is determined by the load.In most applications, electric motors, solid-state controls, and transformers determine the power factor of the system. Induction motors usually have a power factor that is no larger than 0.8. Incandescent lighting is a resistive load of about 1.0 power factor, or unity. Solid-state controls, variable frequency drivers, variable speed drivers, and systems for the UPS can operate at any power factor, leading or lagging. In this case, the power factor can be between 0.4 and 1.0.The power factor of a system may be determined by a power factor meter or by calculations. Determine the power requirement in kW by multiplying the power factor by the kVA that is supplied to the system. As the power factor increases, the total current that is supplied to a constant power demand will decrease. With equal loads, a lower power factor will draw more current. A high power factor will result in full engine load that is less than the generator's rated amperage. A lower power factor increases the possibility of overloading the generator.Note: Normally, Caterpillar generators